Hugelkultur and The Pit of Despair

I’d like this word anyhow, even if it didn’t apply to anything important in my life.

If you pronounce it in a shitty Australian-tinged German accent, you can make it sound like Hegelkultur, which makes me pretty pleased to be synthesizing the ecology while composting all the junk in my garden.

Here’s a little story, to explain that obscure sentence.

‘Ecologize the beer’ and ‘Compost the Dialectic’ were the warrior cries of my fellow students at the Institute of Social Ecology back in the early ‘90s at Goddard College. We were steeped in the words of Murray Bookchin and his demand that we have a solid understanding of thesis/antithesis/synthesis, as he saw Hegel’s dialectics as pointing to a developmental philosophy of change and growth. The warrior cries often happened late at night, well past the last coffee and beer run to the Maple Valley Cafe, accompanied by some seriously tribal music.

We were one with the universe and we knew about the beauty of closed cycles and permaculture and integrated design. We knew, beyond a doubt that, no matter what you do (other than instigating a scorched earth policy), compost happens.

Back to our regularly scheduled programming.

The hugel rises from the pit of despair in my garden.

Hugelkultur is all about composting with a long view. It’s making raised beds out of stuff that takes decades to compost, feeding your soil for a long, long time. The long view takes you past the neediness of now, and puts much of our short, tiny lives into perspective. I like that, I feel less short and tiny. Not that anyone has ever accused me of being either short or tiny (except my brother, who takes cheeky liberties that no one else could possibly get away with).

Hugel + kultur roughly means hump or lump or heap gardening. You create a hugel, and it’s pretty much a raised bed. It’s that simple.

You start with wood trimmings, broken branches, etc. I live in the middle of a forest, so that shit is everywhere. You might be a bit stumped for city gardening, unless you have a direct line to the tree trimming folks.

So to build your hugel, you lay down big wood, then smaller wood, then heavier or blanket-type composty stuff (including unprinted cardboard, old cotton or wool fabric, rugs, jute bags), then top that with upside down sods if you’ve got them, and then cover it all with some good well-matured compost. Well, that’s the technical way of doing it. You do you, because compost happens.

We’re forever cutting and pruning and picking up the wind-smashed branches of the birch trees that surround us. A lot of the waste wood goes into brush fences around the vegetable compound as an additional method of keeping the FRWH (Fucking Rodents with Hooves) out. Beating the forest back from the house and the yard, like sweeping the floors of the house, is an ongoing Zen exercise in futility. 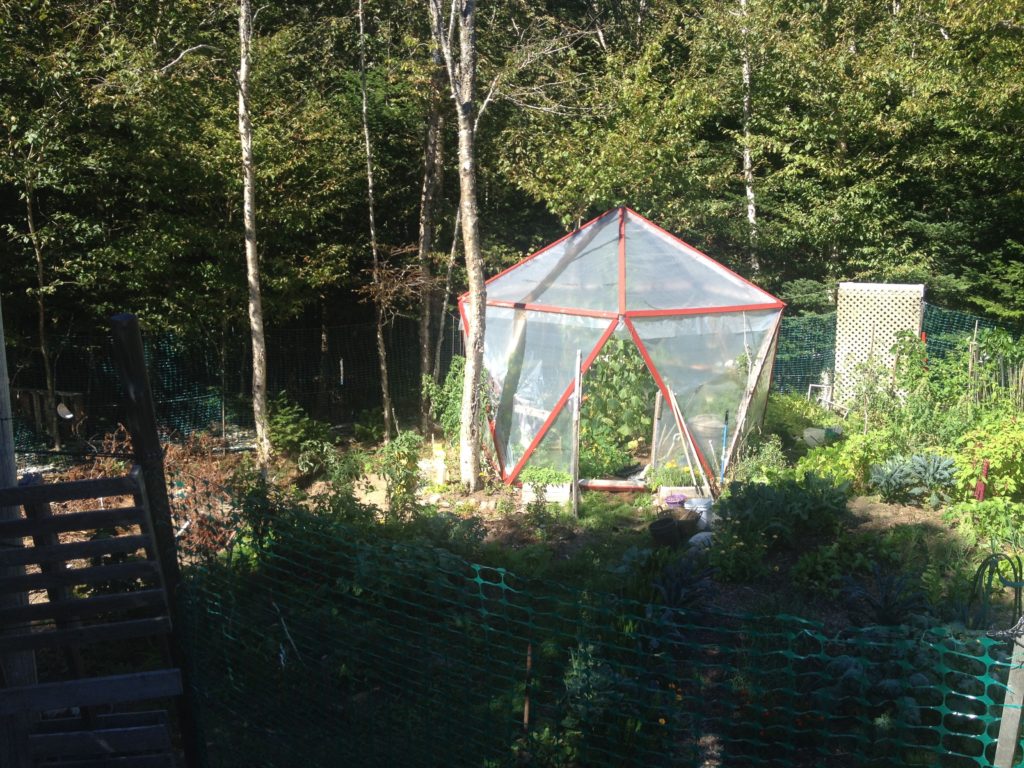 The Pit of Despair is on the left of the modified geodesic dome greenhouse, where all the brown junk is. Not a good picture. I’ll do better next season.

This year, I started to expand the growing area into the Pit of Despair, just west of the greenhouse that’s shaped like a pentagonal prism. I made some cool terraced beds to hold the two steeper sides of the Pit of Despair from collapsing in on themselves like so much emotional baggage.

A forgotten area of the garden, the Pit of Despair is depressed. It’s between 5 and 8 feet below the rest of the growing area. It used to be outside the growing area, but we enclosed it in 2015 in a fit of exuberance for growing cordonned fruit trees. That still might happen. But in the meantime, all compostable junk from the food garden lands in the bottom of the Pit of Despair.

This year, I started throwing bigger, brawnier stuff from the west side of the property into the Pit, because why not? Easier than lugging it all the way round the perimeter of the food garden to add to the brush fence. So voilà, I started a hugelkultur. It’s about 3-4 feet higher than when I started, and 3-5 feet wide and 10 feet long.

My in-process hugel doesn’t look very kultured. Our retired bed linens are straggled through it, an old patio umbrella cover flaps around when it’s windy, cardboard and greenhouse junk stay where they landed when I threw them over the side of the Pit…

But the nice thing about embracing the long view is that it’s all process. That’s what keeps me out of the Pit of Despair. Process. There are no unfinished projects here, just projects that are in process. I live by a (paraphrased) old Arabic saying that I came across when I was researching building with mud and dirt: “the day a person lays the last brick on their house is the day they die.”

In other words, it’s all process, so don’t ever stop renovating, garden overhauling, or decluttering.

In 2017, I’ll work on the hugel some more so I can kultur it — those cordonned fruit trees might happen after all. Until then, I’ve got lots of time to contemplate a new name for that part of the garden — and to find another Pit for my Despair.